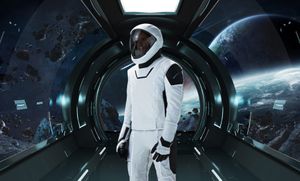 It’s an ironic universe where random coincidences mess with our pattern seeking minds.

Our smartphones miraculously advertise Huggies to us when our friend has been telling us about their recent bowel control problem. Or a fortune cookie tells you the ‘gravity of your situation is about to drastically improve’, while you happen to be on your way to another face lift operation.

Other times the universe rewards us in mysterious ways we aren’t yet aware of, like when Pat Boone shows up in a dream  white washing some previously NON cringeworthy song and we figure there’s got to be some silver lining to this. (Though imho, Pat Boone is proof positive that God indeed does not exist.) Still other times we experience strange instances of life imitating art, like in November 2016 when Orange really did become the new Black.

I submit to you an instance of all three of these things occurring simultaneously. Ripley is SpaceX’s shiny new crash test dummy, or ‘smartie’ - because not considering this inanimate object’s NON feelings says more about us than it does about the dummy, doesn’t it? - that’s actually loaded with ultra sensitive sensors to detect any potential threats in the shuttle, just like the real (fictional) Ripley.

Our instance of irony lies in the fact that this Ripley is more like Ash, a robotic corporate tool with a stick up it’s butt, made to gather data that it’s human counterparts ‘might find distressing.’

the instance of life imitating art, well that’s pretty on the nose. Not only is Ripley named after...uh, Ripley, but the Spacex’s Falcon rockets are named after the Millenium Falcon, and the company tributized the late David Bowie, pointlessly launching a mannequin in a spacesuit in a Tesla Roadster into space, proving once and for all that the modern world does in fact require a media tie-in in order to focus their Tide Pod sized attention span. What an age we live in.

Lastly, the instance of unexpected reward lies in the fact Ripley will gather hitherto unknown data for a fantastically ambitious company striving to propel the human race into the brighter future it envisions. Will that future actually be bright? Well, like all other periods of history it’s full of humans, so it’s a toss up. But it will also be full of robots. That can’t be bad...