Welcome to my new blog for all things Ash: A Fan Fiction Comic & ALIEN!

To kick things off, this first entry is an interview I recently conducted with Tommi Hartikainen, composer of the amazing score for Fox Next’s new high end mobile game, ‘ALIEN : BLACKOUT.’ I’d like to thank him and the studio for this singular experience. Enjoy! And don't forget to visit Tommi on the web here.

-What is it about music that compelled you to pursue it?

TH: I originally got into music through dance. I found it liberating being able to channel rhythm through other medium than just my body. I never was as much of a visual person, so it turned out a better fit, overall. Later on, I got really into sound itself, then harmony and then just about everything audio.

-How did you become involved with Rival Games?

TH: It was one of those things that just felt like it was meant to happen. A brand new game developer focusing on storytelling games emerging in the same small city? I found the prospect immediately interesting and did not take long to find a mutual resonance.

-What has been your favorite and, if you can discuss it, least favorite project and why?

-Do you have a favorite genre or sub genre to compose in?

TH: No. I am musically completely omnivorous. If I was forced to pick something, I might pick classical, metal, country or something entirely different depending on the day.

-Who would you cite as major influences on your personal compositional style?

TH: While I feel listening to a vast variety of different styles of music has affected me more than the work of any single specific person, I can think of hundreds of composers that have had an effect on me. From the top of my head Beethoven, Dallapiccola, Philip Glass, Danny Elfman, Joe Hisaishi, David Sylvian, Soundgarden, Rush, Radiohead first spring to mind for some reason- in no particular order. Well maybe besides Beethoven. Have to lead with that one.

-Did you come to the project as a long time fan?

TH: Yes, I can honestly say I did. I think I first saw Alien at around eight years old and while it did not leave scars or acid burns in my psyche, it did leave a lasting impression in more ways than one. The wonderful soundtrack, innovative orchestral arrangement, camera work, acting, ambience, the grip it held me in throughout and the bleak, yet awe-inspiring futuristic visions to name a few. 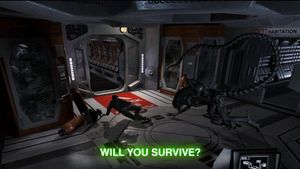 -What was your starting point for composing Blackout’s score?

TH: Trying to absorb the feel and atmosphere from the movies. I found Alien, Alien 3 and Prometheus the most suitable references for our game. The loneliness of space, the incredibly vivid dynamics, fear of the unknown and the seemingly never-ending anticipation morphing into revelatory moments of clarity. The classic retro-feel of Alien, the eerie sadness of Alien 3 and the more modern production values from Prometheus. Then selecting the instrumentation I was to use. I love setting boundaries for myself to keep things fresh. Paint yourself in a corner. See how you manage to free yourself from there in different rooms. Even try getting some paint on you. Sometimes the unwanted is wanted, like with bringing resonances to the forefront in the mix in certain most intense parts that I did to really get under the player's fingernails. Forcing change upon yourself or having to adapt into different confines just keeps things fresh. I use the same approach with plugins in the mixing-realm, since they are readily available, often partly interchangeable and easily transferable.

-We’re all aware of initial backlash to Blackout’s announcement. Did this bother you, were you laughing and saying ‘just wait’, or were you on to other things and not really concerned?

TH: We felt pretty happy and confident with our product and were very aware of the potentially controversial nature of following up the niche fan-favourite, Isolation- on mobile, of all platforms. We were making an independent product - isolated, if you will (cough)- from the other games. We wanted to bring high production values in presentation to the mobile platform within a concentrated scope suitable for the limitations of the platform, while also playing to its strengths and the full technical potential of the day. A premium product in every sense of the word, here. No grabbing nor flipping of any kind. What we were NOT trying to do was make a sequel to anything, but rather just something refreshing and striking.

-I adore your work on this game, and it shows how an artist can be influenced by others’ work without just ripping them off. Can you discuss how you stayed true to Jerry Goldsmith’s score while making this one your own?

TH: I endeavored combining the specific orchestrational groups I had selected in surprising and interactive ways, write for them as I would from a clean slate, while aiming for capturing movement between the different qualities I mentioned extracting from the three films, and then finally warp them according to my aural vision. That might be be best verbal approximation I can come up with. 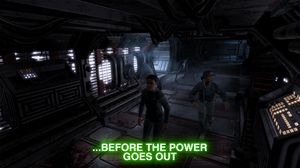 -How much did the game itself influence your compositions? Were you given an early version of the game to play, or perhaps a worksheet describing what they game makers wanted?

TH: I had already completed the first draft of the audio design and I was indeed composing for this game and this game alone, but as I was only vaguely aware of the likely usage points for spotting at time of composition (because of the swift development schedule), I had to try creating all kinds of musical movements and combinations to cover also the unexpected needs. In the end, there was just exactly the right amount of finished music for spotting and keeping things fresh with the background music. There were, in fact, two songs I composed that did not make it to the game or soundtrack because I did not consider it good use of the limited time to produce them further via the additional final arrangements, recording, mixing and audio programming required plus bearing in mind the space limitations of the target platform.

-What are some other scores you’re particularly proud of?

TH:  I always seem to feel the latest thing I've done is the best thing I've ever done and the rest is available for burning in a pyre of sheet music. In this case I'd probably be inclined to say my second-latest project, then: Thief of Thieves- Season One (by Rival Games, out on PC/Steam and Xbox One). I do feel the minimalist compositions I made for classical quartet suits the feel of the graphic novel- cutscenes, with larger story arcs and machinations working with finesse behind the proverbial curtains.

Visit Tommi on the web: http://tommihartikainen.com/#about